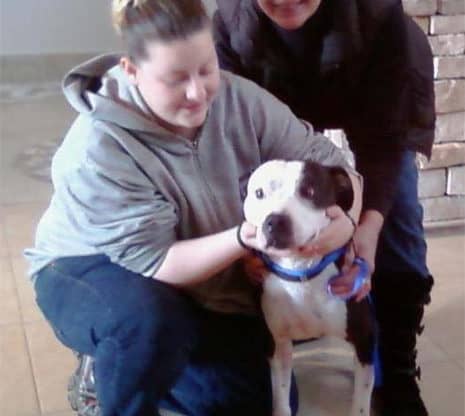 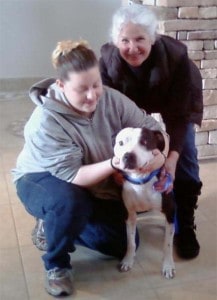 Living under an assumed identity is stressful, but for Willie, a mixed breed Pit Bull Terrier from Roseburg, Oregon, it was a way of life. Two years ago Willie and his family were happy and enjoying rainy Oregon when he was kidnapped (stolen).

His journey took him to the Yurok Indian Reservation near Crescent City, California. A new alias (Kane) and some rough days lay ahead. Willie was seized by Yurok Tribal Police on suspected animal cruelty and abandonment. A Folsom family found Willie (now known as Marco) online, adopted him, and brought him to Folsom.

Willie’s story doesn’t end there. A new town, a new identity, Willie went by Rocky to people around here. Life was good; good family, good friends, drier climate. When Willie went to a local animal hospital for treatment, his life on the lam was unmasked.

In Roseburg, Willie had been micro-chipped. His micro-chip told a tale of kidnapping, police seizure, foster families, and a family in Oregon who missed him terribly.

On Tuesday Willie’s parents in Oregon rushed to Folsom in hopes of recovering the beloved pet. A reunion ensued, a quick revert to a familiar name, and Willie was on I-5 north bound headed for the state line. Apparently he hadn’t forgotten where he came from. Willie became antsy as he approached his birthplace, and settled quickly into his old home, two years after being stolen. There are no suspects in Willie’s case, just a happy ending.

The City of Folsom Animal Services Department would like to remind you to micro-chip your pets, so your story can end as happily as Willie’s. On the 4th Wednesday of every month in Folsom, Animal Services micro-chips pets for $20 and provides vaccinations for $5 at The Folsom City Zoo Sanctuary from 6-8p. Contact Animal Services Officer Cindy Walden at [email protected] or at (916) 439-2268 for more details.