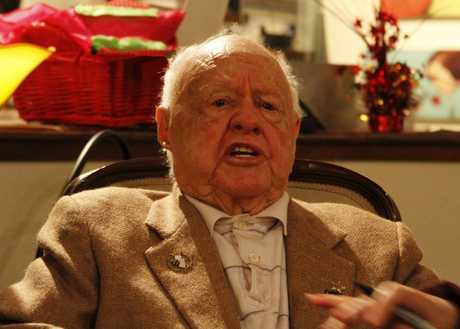 Mickey Rooney, the only person in history to appear in films in ten decades, scheduled two evenings with friends at American Visions Galleries, in Historic Folsom.

The much loved film star and entertainer is sharing his stories of the past like the role he played getting Judy Garland hired for the Wizard of Oz. He is also talking about his “mentoring” of budding artists and current stars of Hollywood, among them Leonardo Dicaprio, Ashton Kutcher and Ben Stiller. He is also prepared to say who has talent and who might not.

Proceeds from both nights are for The Actor’s Fund for retired and needy artists. One of the dark secrets of Hollywood is that many entertainers of earlier times, many who were well known and loved were owned by the film companies and got very little of what they brought in. In a recent interview, he recounted that Soupy Sales, one of the best known to the Baby Boomer generation, couldn’t afford much of the care he needed and died in a nursing home sharing a room with four others.

He also shared that while the production companies made bundles of money from her work, Marilyn Monroe was one of the least paid actresses of the time.

On Friday, Mickey, who recently turned 90, and his wife Jan, were guests of honor at a small, catered dinner at American Visions’ new gallery at Quarry Ponds on Douglas Boulevard in Granite Bay. 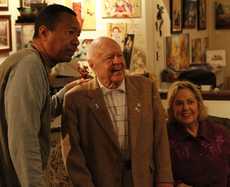 Guests dined with Mickey and Jan, who entertained them with untold stories. Guests also saw footage from a new reality series, “Mickey Rooney’s Hollywood,” that’s in the works.

A large collection of posters and photographs depicting Mickey’s movies and performances – many of which have never been shown to the public, are on display at the gallery through the event and the week following.

Today, Mickey was at American Visions Gallery in the historic district of Folsom, with Jan and son Chris.

Mickey’s tie with American Visions began when Gabrielle Stark and Katie Sacco, employed by the gallery and owner, Giovanna Stark, worked with producers last year on preparing an oral and video taped history of Mickey Rooney’s Hollywood. During their time with Mickey and his wife Jan, they rode with them to make spontaneous drop-in visits to a number of Hollywood’s favorites and gathered his stories working with Hollywood legends – then and now.

Mickey Rooney is a man with over 200 films under his belt. He earned an Honorary Oscar for Lifetime Achievement, a special Juvenile Oscar he shared with Deana Durbin in 1939, five Oscar nominations, one Emmy Award, five Emmy Nominations and two Golden Globes. Mickey’s career has extended through many generations and in many different directions.

This was his first appearance in Northern California, and several hundred people attended the Gallery event today.