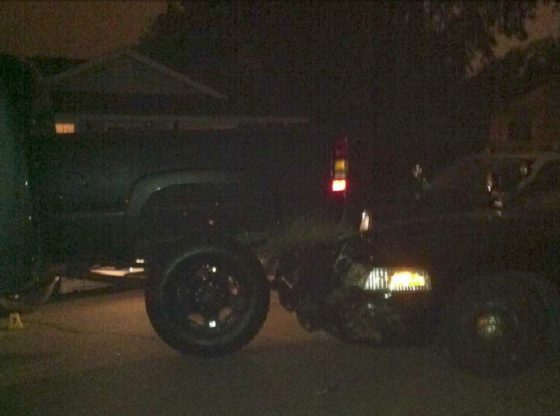 Early this morning, minutes before 2:00 A.M., officers patrolling the Historic District of Folsom witnessed a raised GMC 4X4 truck back into a parked marked patrol unit in the 700 block of Sutter Street.

A marked patrol unit in the area attempted to stop the vehicle a few blocks away, but the driver failed to yield to police lights and siren. During the ensuing four minute pursuit, the truck swerved at multiple marked patrol units at Fargo Drive near Briarcliff Drive causing at least one officer to take evasive action to avoid his marked police vehicle being struck. The driver’s action resulted in the suspect’s vehicle leaving the paved roadway and onto residential yards in the neighborhood.

The full size GMC truck continued to ignore the marked patrol units’ lights and sirens for another 1/4 mile. While still attempting to evade the pursuing officers, the truck drove into the driveway of a home in the 1200 block of School Street.

The driver, with no outlet to the front of his vehicle, backed his truck towards officers who had exited their vehicles expecting the pursuit had ended. One officer in fear of his safety fired several shots at the driver. The raised, full size GMC came to rest partially on the hood of a pursing police vehicle.

With his vehicle disabled, the driver still refused to exit his vehicle. The driver eventually surrendered to officers and was deemed to be uninjured by either gunfire or the multiple collisions. No officers were injured during this incident.

Perry Persijn, 27, of Sacramento, was arrested for Assault with a Deadly Weapon against a Peace Officer, Felony Evading, Hit and Run, and Impaired Driving.