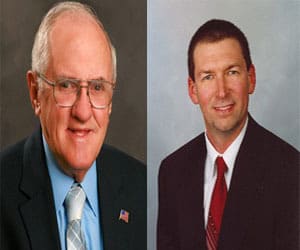 The Folsom City Council elected Andy Morin as mayor and Ernie Sheldon as vice mayor during a Dec. 13 Council meeting.  They will serve one year terms effective immediately.

Mayor Morin has served on the City Council since 2002.  He served two previous terms as mayor in 2006 and 2007, and as vice mayor in 2005 and 2010.  A 22-year Folsom resident, he also served as a Folsom Planning Commissioner, member of the Folsom Schools Bond Oversight Committee, Treasurer of the Folsom Public Library Foundation and Chair of the 2002 Measure C School Bond Campaign.
A graduate of Oregon State University, Mayor Morin is a senior hydrologist with the California-Nevada River Forecast Center.  He resides in Folsom with his wife and two sons.

Vice Mayor Sheldon was elected to the City Council in 2008.  A 25-year resident of Folsom, he served on the City’s Parks and Recreation Commission for two decades, writing Folsom’s first Parks Master Plan.  He also served as executive director of the Folsom Athletic Association for 20 years.

A retired United States Air Force Lt. Colonel, Vice Mayor Sheldon has a Masters degree in Management from the University of Nebraska.  He resides in Folsom.