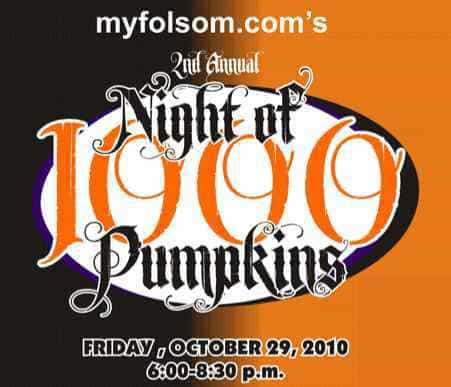 The now annual Night of 1000 Pumpkins event is expected to draw 2500 residents and visitors; Organizers are asking attendees to bring a carved pumpkin to the event to display.

“We can’t make it to 1,000 pumpkins alone”, said organizer John Gladding, of MyFolsom.com. “We need everyone’s pumpkins to make this a success! This is a community event!”

Prizes will be awarded in the following categories: Scariest Pumpkin, Best Special Effects Pumpkin, Best Traditional Pumpkin, Funniest Pumpkin, and Best Kids Pumpkin. A costume parade will also be in effect, as well as 2 Halloween movies (one scary movie, one kids movie), face painters, and other attractions which promise to make the night fun for all ages. Organizers expect a zombie “flash mob” may appear during the event as well.

Sutter Fallfest will follow the event the next day, as on Saturday October 30, a fall festival will feature scarecrow contests, chili cookoffs, food and vendors.

Sutter Street is in the middle of a makeover, as 1950’s-era updates are being removed, and improvements are being made with new sidewalks, awnings, and paint work on the historic buildings. However the events continue, and the businesses urge people to come out to check out the progress. Construction crews will be out of sight and the street will be cleaned up in time for the event. Last year’s inaugural event was a great success. Thousands showed up to check out a few hundred pumpkins, kids were dressed up in costumes, and many Sutter Street stores decorated their businesses for Halloween.

Discuss the Night of 1000 Pumpkins in the MyFolsom Forums.

Carve a Pumpkin, Create a Scarecrow, Cook Up Some Chili or Soup!
Folsom Real Estate Roundtable