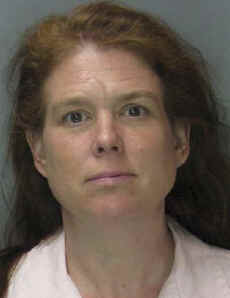 On 5/26/2010 Susan Moskalets, 46, of Somerset, surrendered herself at the Sacramento County Main Jail. Moskalets was the driver of the Mercedes in which she and her children were traveling when the collision occurred. An investigation into Moskelats impairment at the time of the collision revealed she had a blood alcohol content of .07 (B.A.C.) in addition to having the prescription drugs Naproxen and Morphine in her bloodstream. Moskalets is being held in lieu of $100,000 bail, charged with felony impaired driving and felony willful harming of a child. She is scheduled to appear in court on 5/28/2010 at 1:30 pm, Department 61.

ORIGINAL: The Folsom Police Department responded to a serious injury collision at the intersection of East Bidwell Street and Bluestone Circle in Folsom shortly after 9 p.m. Wednesday evening. When officers arrived they discovered a 1983 Mercedes station wagon at rest on the sidewalk of the Southeast coroner with major damage to its passenger side, almost ripped in half. A Dodge Durango was left disabled with major passenger side damage facing southbound in the northbound lanes.

The Mercedes was driven by an adult female driver with three children between seven and eight years of age as passengers. The Durango was occupied by only a female adult driver. All five parties involved were transported to area hospitals with moderate to serious injuries. At least one of the children’s injuries was considered life threatening.

The Folsom Police Department’s Major Accident Reconstruction Team, or M.A.R.T., responded to complete the investigation. Preliminary reports alcohol may have been a factor. This investigation is ongoing.