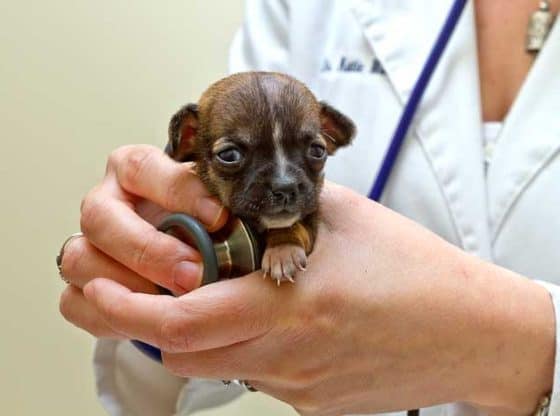 Beyonce, the world’s tiniest rescue puppy who has captured the heart of millions around the world, received a clean bill of health from her veterinarian, Dr Jennifer Sweet DVM, and showed off her remarkable strength by taking her first steps.

Beyonce was rescued by The Grace Foundation of Northern California, a nonprofit organization that rescues and rehabilitates hundreds of animals each year, (both large and small), that would otherwise be euthanized. These animals are paired with disadvantaged and special needs children and youth in a variety of therapeutic, educational and leadership programs.

Beyonce was not breathing when she was born and had to be resuscitated. Her size so small that she fit into a spoon. Now just 4 weeks later little Beyonce has weighed in at almost 7 ounces, a far cry from her birth weight of just under 1 ounce. While her weight is still only a fraction of what a normal puppy of her breed would weigh at this age (Beyonce’s brothers and sisters are weighing in at over 1 pound 10 ounces), it is a positive indication that the world’s tiniest puppy will be able to live a full and complete life.

Beyonce (named for the song “I am a survivor” by R & B singer Beyonce) become an overnight superstar when her amazing story of survival went viral in late March. This tiny survivor has captivated the world, being featured on hundreds of media outlets in dozens of countries. At two weeks of age Beyonce was crowned “The world’s smallest puppy” by the world record academy. (Guinness does not have a category for smallest puppy).

Sadly, more than 3 million dogs and cats in America will not be as lucky as Beyonce and her family and will be euthanized this year simply because there is not enough homes for these pets,” says Grace Foundation of Northern California’s founder and executive Director Beth DeCaprio.

“This problem is 100% correctable if people would spay and neuter their pets and adopt from rescues and shelters instead of buying purebred dogs. Beyonce has given us a platform to bring this senseless loss of life to the attention of the world,” adds Beth.

In just two short weeks Beyonce has been able to bring to light the plight of rescue animals and has become an ambassador for homeless and shelter dogs and cats all over the world, “In my life I haven’t been able to get a message across about rescue animals like this tiny 6 ounce puppy has been able to, says Grace Foundation of Northern California’s founder and executive Director Beth DeCaprio.

For that reason The Grace Foundation has decided to make Beyonce’s job as ambassador more permanent representing Grace and rescue animals everywhere. To date Grace has received thousands of phone calls and over 500 applications for Beyonce. In a letter that was posted on The Grace Foundation’s website and Facebook page, The Grace Foundation stated, “after much consideration, we have decided that Beyonce will not be going up for adoption. We feel that it would be wrong to adopt her out to be loved by just one family when there is an entire country in love with her and a cause that needs her help and support”.)

Michael Hutchinson a supporter of The Grace Foundation summarized the reason that Beyonce has made such an impact on the world. “At a time when despair and suffering occupies our TV screens and newspapers. It is a nice to have a story that renews our faith in the amazing capacity of all creatures to give hope to others. Little Beyoncé is proof that the ability to change the world is not determined by size.As she has proven, all it takes is an ounce of heart and determination to make a difference”.

The Beyonce, “I’m a Survivor” fund has been established at Grace to support last chance rescue animals. To learn more visit www.thegracefoundationofnorcal.org.

Background: Since The Grace Foundation’s founding in 2004, The Grace Foundation has been dedicated to saving the lives of horses and other animals. Grace provides critical care and rehabilitation for abused and neglected horses, livestock, dogs, and cats.

Many of these animals are then utilized for equine-assisted learning and therapeutic programs for youth and children. Since its inception, The Grace Foundation has helped thousands of kids who are at-risk or have suffered from abuse and neglect themselves.

Grace also offers programs for people of all ages that are struggling with autism and other physical and emotional challenges, as well as a variety of youth leadership programs and life science classes.