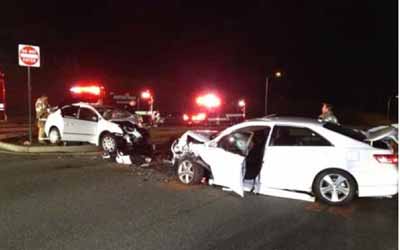 On Friday night, at 9:30 pm, Folsom Police and Fire Personnel responded to a serious injury collision at the intersection of Iron Point Road and Black Diamond Drive.

The Nissan had been traveling eastbound on Iron Point Road in the westbound traffic lanes. In the 1100 block of Iron Point Road, the two vehicles collided head-on likely at the posted 45 mph speed limit.

The driver of the Sentra was identified as Karen Ann Benedict (32) of El Dorado Hills. She was arrested for driving under the influence of alcohol resulting in serious injuries, but was released from custody to be treated for the injuries she sustained in the collision.

The family from the Camry are being treated at area hospitals for serious injuries. No information related to the victims will be made available.

Folsom Police say the results of the complete investigation will be forwarded to the Sacramento County District Attorney’s Office with criminal charge recommendations.

Burglar Caught In The Act, in Prairie Oaks, Folsom
Fresh & Easy To Open In Folsom