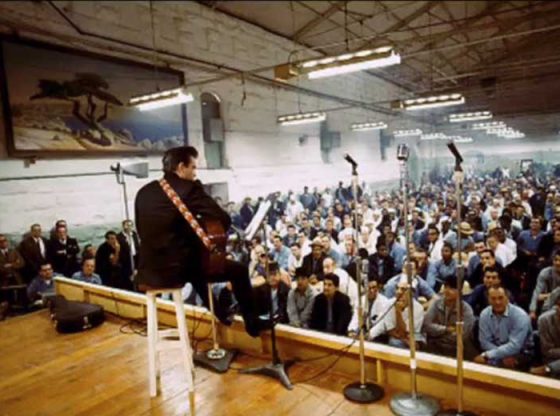 Johnny Cash, known as “The Man in Black,” died Friday morning of respiratory failure. He was 71. He had been admitted to Baptist Hospital in Nashville, Tennessee, with pancreatitis, and was discharged three days prior to his death.

“Johnny died due to complications from diabetes, which resulted in respiratory failure. I hope that friends and fans of Johnny will pray for the Cash family to find comfort during this very difficult time.”

The Cash family are expected to announce funeral arrangements once they are known.

He suffered from autonomic neuropathy, a nervous-system disease, that brings on respiratory problems. Over his final few years, we was in and out of hospital with pneumonia.

Johnny’s first wife was Vivian Cash. She said “Drugs and June Carter” ruined her marriage. When Johnny left Vivian, she was left to take care of their four daughters.

His second wife, June Carter Cash, died in May, at the age of 73, after complications with heart surgery.

Marty Stuart, who joined Johnny’s band in 1973, who married and later divorced Johnny’s daughter, was recording with Johnny in the months after June Carter Cash’s death.

You build on failure. You use it as a stepping stone.

Johnny Cash had successes and failures throughout his life. He once said “You build on failure. You use it as a stepping stone. Close the door on the past. You don’t try to forget the mistakes, but you don’t dwell on it. You don’t let it have any of your energy, or any of your time, or any of your space.”

Johnny Cash authored more than 400 songs. More than 100 of those songs made it into top-40 country hits lists. Dozens of his songs were crossover pop hits. His lyrics spoke for people at the lower end of society, the downtrodden, the outcasts, the religious, the righteous and the romantics.

Johnny Cash had an undisputable connection with Folsom. In 1956, his second single was “Folsom Prison Blues.” He had a unique dark side that nobody else in country or rock could come close to matching. The line “I shot a man in Reno/ Just to watch him die,” came with a growl in his voice, which some called a deep-thunder deadpan.

Here are comments from people in the music industry, sourced from their websites or interviews

“All I can say is I’m very, very sad today. Johnny Cash is a legend who inspired other legends. My heart is heavy and my prayers go out to the Cash family. He has made an impression on many people and their lives. He will be deeply missed but never forgotten.”

“I am sad to see the passing of an American legend.”

“I remember the first time I heard ‘Ring of Fire,’ I thought to myself, Johnny Cash is way ahead of his time. He was. Johnny Cash is a once-in-a-lifetime artist. His name will forever be etched in Country Music history.”

“He was just one of those guys that didn’t try to be cool, and that’s what made him so cool – he was just himself.”

Johnny’s passing hits close to home for me because my Dad used to play with him in the early years of his career. My dad was still in High School and Johnny hired him to play upright bass in his band (1955).

Our family spent time with Johnny and June in Florida back in the early 80’s when they bought a home just minutes away from where we lived. We spent a lot of their time on the water with them and friends.

Just the other day, I was going through some old furniture that my mom had given me. One item was a book case. I found a book and in it was a folded napkin with Johnny’s signature on it. Johnny had given it to my Pop one day at lunch. Today, it has a brand new meaning to me.”

“The day that we would lose Johnny Cash is a day which I think we have all dreaded quietly and secretly, until now and sadly enough, that day is here. I’m grateful to him for being a rebel and pushing boundaries that have encouraged us to not only grow and live, but thrive beyond the confines of the ‘norm’. He was our Beacon in Black and the Gentle Giant of our most progressive musical generation. We will miss your long, tall shadow. Much love to your family, Johnny.”

“It’s a sad day in country music today. Johnny Cash’s voice was arguably one of the most recognizable and influential in country music. It’s devastating to lose two great country artists in the same year. Johnny Cash and his wife June Carter Cash were truly a dynamic force in shaping the music industry. Our thoughts and prayers are with their family.”

“Even though all of us try to wear black, there will only ever be one Man In Black. I hate to see our outlaw heroes leave because they have influenced country music so much. I don’t know that anyone can stand on the mountain like they have.”

“You know, two years after I moved to Nashville, I was in a guitar shop casually looking around and I just about bumped into this man (and he was dressed in black). When I turned around and realized who it was, I remember just standing their in awe. I kept pretending like I was looking at the guitars on the wall, but I just couldn’t take my eyes off of him. I was just frozen. I’ll never forget how I felt just to be that close to him. I guess that tells you the effect Johnny Cash had on me!”

“I feel more than privileged to have performed in concert with one of Country Music’s greatest legends. His memory will be eternal.”

“Johnny Cash was one of the most amazing people to grace the Earth. His talents as a songwriter and an artist speak for themselves. I’m grateful to Rick Rubin for the opportunity to work him and Johnny on ‘American IV: The Man Comes Around.’ It was a true honor. To witness him receive his first Gold record in 30 years was one of the proudest moments for all of us at Lost Highway. He and Rick made beautiful music together. Johnny Cash was a beautiful person.”

“I have lost one of my best friends. It leaves a dark void in my life that is blacker than any coat he ever wore. He is irreplaceable. Even in death I have no doubt that Johnny Cash will continue to live on as an inspiration to musicians & songwriters and all of America.”

“Johnny Cash was such an icon in the music industry. I respected him for creating and performing his music his way and not letting anyone change him. That is so rare today. He will be greatly missed, but never forgotten.”

Merle Haggard, before Johnny Cash died: “Everybody likes Johnny Cash. I think the sad part of it is his health is givin’ him problems.”

“It’s a sad day in Tennessee, but a great day in Heaven. The ‘Man in Black’ is now wearing white as he joins his wife June in the angel band.”

“As a teenager, I did some modeling. I modeled in a number of charity fashion shows here in town. June Cash was very involved in the events. She had an exquisite collection of fur coats that Johnny had given to her as gifts over the years. She would let us use them as “accessories” for the fashion show. I remember going to the Cash home to try them on prior to the show. That’s when Johnny made his first impression on me. I will always remember how I thought just in looking at him and observing how he reacted and responded to June, oh my gosh, this man is so in love with his wife. As a teenager I thought that! June and Johnny were in love from beginning to end. I am truly saddened by the loss, but my heart is happy to know they are together again.”

“Generations come and go in country music. It is easy sometimes for the heroes of this genre to be overlooked, but Johnny Cash could not be forgotten. He was, he is, and always will be the epitome of country music. I regret deeply that I have not nurtured a closer personal friendship, but he certainly knew he had my respect.”

“Johnny Cash was a music legend and American icon whose career spanned decades and genres. His resonant voice and human compassion reached the hearts and souls of generations, and he will be missed. Laura joins me in sending our thoughts and prayers to his family.”

“Johnny Cash was not only a legend, but was a close personal friend. Johnny was a good man who also struggled with many challenges in life.

Johnny was a deeply religious man. He and June came to a number of our Crusades over a period of many years. Ruth and I took a number of personal vacations with them at their home in Jamaica and in other places. They both were like a brother and sister to Ruth and me. We loved them.

We are praying that God will comfort his family and staff at this critical time. I look forward to seeing Johnny and June in heaven one day.”

“I am deeply saddened by the loss of my children’s grandfather and my very dear friend. I loved big John with all my heart. The citizens of the world have lost one of their most enduring guiding lights. As a musical hero to millions, a trailblazing artist, humanitarian, spiritual leader, social commentator and most importantly, patriarch to one of the most varied and colorful extended families imaginable, Johnny Cash will, like Will Rogers, stand forever as a symbol of intelligence, creativity, compassion and common sense. I’m thinking Mt. Rushmore.”

“Johnny Cash is not only a monument to Country Music but to all genres of music. We all should be proud that Johnny Cash extended his talents as a gentleman and an artist to create the foundation of Country Music.”

“Johnny Cash was singled out – a truly great artist. Unique and one of a kind. He was a great American, and his music was the spirit of America – all that is good about this great country. No matter what situation we find ourselves in playing music, we can never go wrong playing a Johnny Cash song. We’re going to miss him.”

“It’s an extremely sad day for all of us in the music community. Johnny Cash had such a tremendous impact and influence on so many of us. I don’t know of any other artist who had such a wide appeal across every music genre.

As a friend, he will be sorely missed. As an influence he will continue to live on.”