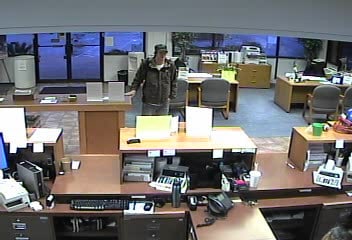 The robber, a white adult male in his early 20’s  implied he had a concealed weapon, but it was not seen by bank staff.

Folsom Police responded when a silent alarm was triggered at the bank. Bank employees said the robber was a tall, thin white male, with medium length hair. He entered the bank wearing a camouflaged hat, set low on his head, hiding some facial features.

The man told the clerk he had a weapon and reached for his waistband, but did not display a weapon. The clerk gave the man an unspecified amount of cash and the man left on foot.

The man is described as a white male adult, around 6 feet tall, of slim build, aged somewhere between late teens to mid 20’s, with medium length brown hair. He was wearing light colored jeans, a white t-shirt, a dark green two-tone jacket, and a camouflaged hat. 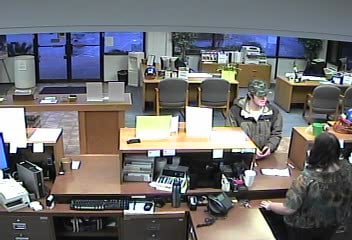