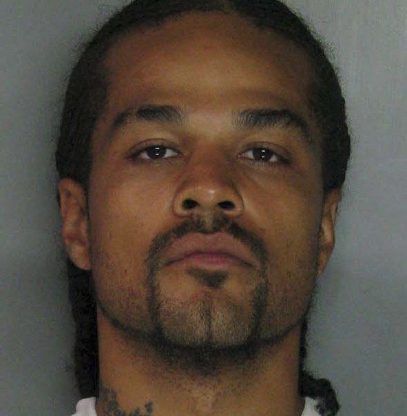 Early Saturday morning, at 1:03 A.M. Folsom Police received a report of a robbery in the parking lot of apartments on Folsom Ranch Drive. One of the victims told officers that two male suspects driving a yellow Ford Mustang had followed them to a friend’s apartment.

One suspect exited the passenger’s side of the Mustang and pointed a handgun at one of the victims, robbing him of his car keys and his cellular telephone.

Six minutes after the robbery was reported, an officer checking the surrounding area located the yellow Ford Mustang at the intersection of American River Canyon Drive and Oak Avenue Parkway. When the officer attempted to stop the suspect vehicle, the driver took the pursuing officers on a ten minute chase through Granite Bay, Roseville, returned to Folsom, and entered Orangevale. On Pershing Avenue at Beech Avenue, the driver of the Mustang lost control of the vehicle where he and his passenger fled the area on foot. The driver of the Mustang had run stop signs, stoplights, and was traveling in excess of 80 miles per hour throughout the pursuit. 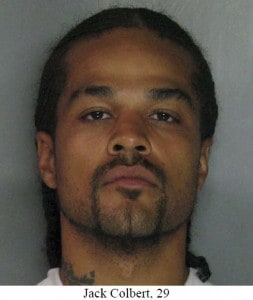 Officers were unable to locate the suspects, but did locate a holster for a handgun, as well as the cellular telephone and car keys stolen from the victim.

Text messages located on the victim’s phone, from one of the suspects shed a different light on the entire incident. Officers discovered the suspect and victim had arranged to conduct a narcotics transaction in the hours before the robbery occurred.

The registered owner of the Mustang called the Sacramento Police Department minutes after the pursuit ended to report her vehicle stolen. The Sacramento Police discovered one of the two suspects at the Mustang owner’s residence when they responded for the report. Sac PD detained Jack Colbert, 29, of Sacramento. The victim was able to positively identify Colbert as the suspect who possessed the handgun during the robbery. 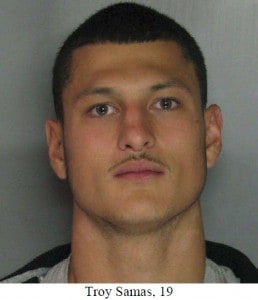 When faced with the evidence located inside his stolen phone, the victim confessed to having been involved in a Marijuana transaction with the suspects when the robbery occurred. One of the two suspects, Troy Samas, 19, of Orangevale had arranged to meet
the victim to purchase a large quantity of Marijuana from the victim. The victim claimed Colbert robbed him and his friends of the Marijuana, cell phone, and keys at the agreed upon meet location.

Samas was arrested on Sunday morning at his mother’s home in Orangevale without incident.

The Placer County Sheriff’s Department contacted Folsom PD and advised that a pedestrian had located a large quantity of Marijuana along the route officers had pursued the Mustang. The pedestrian surrendered the drugs to sheriff’s deputies, who connected the find to this investigation.

On Tuesday an off duty peace officer followed up with investigators regarding his report that he had witnessed the pursuit from his Roseville residence, saw two distinct muzzle flashes come from the Mustang, and could smell gun powder after having heard the handgun being fired. Investigators are searching for the missing handgun and evidence to support the off duty officer’s report. If the public has any information regarding this incident or the firearm, they are encouraged to call the Folsom Police Tipline at (916) 585-4110.

Samas and Colbert were booked into the Sacramento County Jail on charges of Conspiracy, Robbery, Commission of a Felony with use of a Firearm, and felony Evading a peace officer.